Dear poodle friends, poodle breeders, exhibitors, and the board of The Poodle Club, 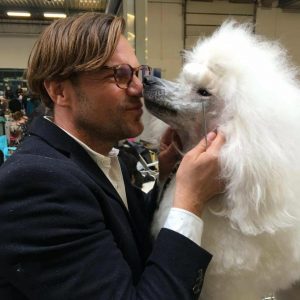 I would first like to thank you so much for the invitation to judge in your country. It is an honor and it thrills me to be able to spend a day with Poodle lovers.

I would like to introduce myself. My name is Kay Smulczynski (Radmacher) and I have been breeding standard white poodles under the kennel name “Mai – Tai’s Allstars” since 2002.

My love of poodles began very early.  My Aunt Kati had a miniature pet poodle named Rudi, and not only did I love that little dog, I would groom him, take him for walks, play in the yard and then groom him some more.  It was much later when I was 25 years old that I finally got my own dog, a purebred Cavalier named Kelly.  The two of us ventured into the dog show world side-by-side and went through all the ups and downs, frustrations and joys of learning this sport together.  At some point thereafter, I imported my first poodle, a standard black named “Brei-Ca’s Never Ever Let You Go”(Escada) and have been in and around the poodle ring constantly ever since.

My first litter gave me my first Best in Show winner “Mai Tai’s Allstars Alexander”.  His litter sister Alison was also very successful in the times before facebook.  Some may remember “Rassita le Papillon” and “Kassam le Papillon” who also won many titles during their show careers.  I got a lot of my foundation help, mentoring and support in Warwick Kennel, and Brei-Ca’s kennel as well. I am very grateful to have had such a solid starting point.

At the moment, only my black toy poodle “High Quality le Papillon”(Frieda) and my Azawakh “Aulad al Sahara’s Imagazan”(Jamal) live with us in Düsseldorf.  In the past few years I have concentrated on earning my judging licence and stopped breeding.  Now that I am certified, I hope to get a white standard poodle and begin showing again in the near future.